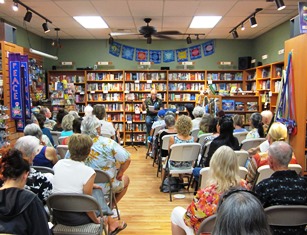 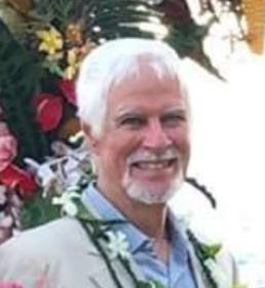 Walter Dudley first came to Hawaii in 1968 to study oceanography in graduate school at the University of Hawaii – Manoa.  This was quickly interrupted when he was drafted into the U.S. army.  Walter was trained as an army engineer officer, then a counterintelligence agent and paratrooper stationed in Germany.  Returning to graduate school after a four-year break, he received his PhD in oceanography and went on to do research in France and participate in numerous oceanographic research cruises around the world.  But Hawaii called, and he ultimately settled on the Big Island, starting the Marine Science Program at UH-Hilo.  He focused on studying tsunamis and improving tsunami preparedness through public education and better evacuation procedures.  In the process of studying past tsunamis, he discovered and became fascinated by little-known bits of history of the Hawaiian Islands, ultimately leading to this book. 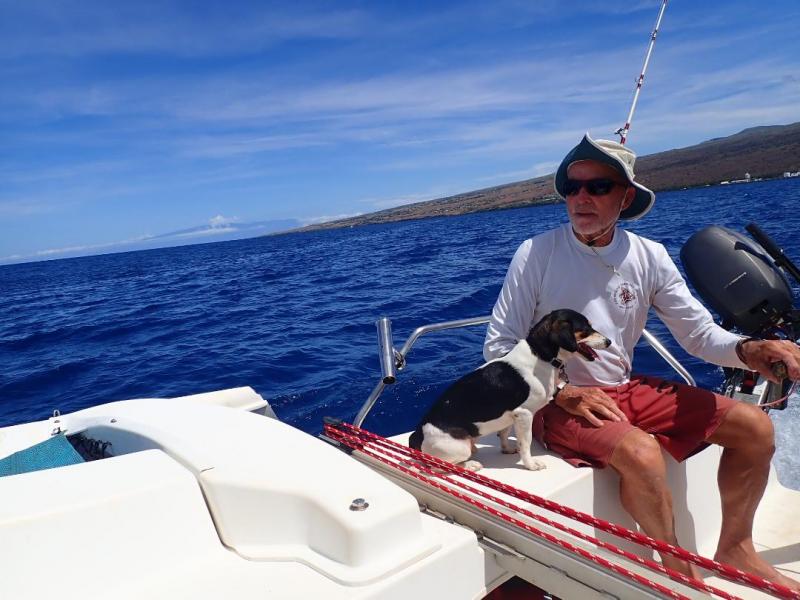 Born in Los Angeles, Pete Hendricks soon felt the Pacific Ocean, bodysurfing on his father’s back and on the family fishing boat.  Surfing, freediving, sailing, and the ocean became lifelong interests.  After graduation from the University of California – Berkeley, he served as a U.S. Navy officer at sea and in Vietnam.  Settling in Hawaii in 1964, Hendricks earned a Med at the University of Hawaii – Manoa, taught high school, and later became a marine extension agent for UH Sea Grant.  He has been a columnist for West Hawaii Today newspaper and writer for the Big Island magazine Waimea Gazette and Ke Ola.  Hendricks lives in Waimea on Hawaii Island and still enjoys sailing, surfing, outrigger canoe paddling and exploring Pacific and Hawaiian maritime history. 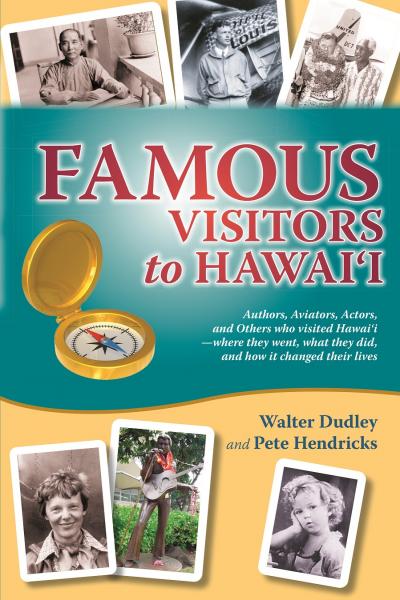 Over the past two centuries, the Hawaiian Islands have been visited by millions of people. Some of these visitors would become famous as authors, actors, aviators, and musicians. Others were already famous and came to Hawai‘i seeking respite from celebrity. All would find their lives changed by Hawai‘i, and many would leave an impact on the Islands.

The characters chosen for this work were carefully selected as those best known and most interesting in their impact worldwide, and include the following: David Douglas, Mark Twain, Robert Louis Stephenson, Thomas Edison, Sun Yat-sen, Jack London, Charles Lindbergh, Amelia Earhart, Shirley Temple, General George Patton, Arthur Godfrey, Buster Crabb, Bing Crosby, Lawrence Rockefeller, Elvis Presley, and George Harrison. Though they were all famous at one time or another, many of their experiences in the Islands are little known and contribute greatly to their Hawai‘i stories. The book also points out places that were visited or by these famous people and spots where artifacts related to them are located. 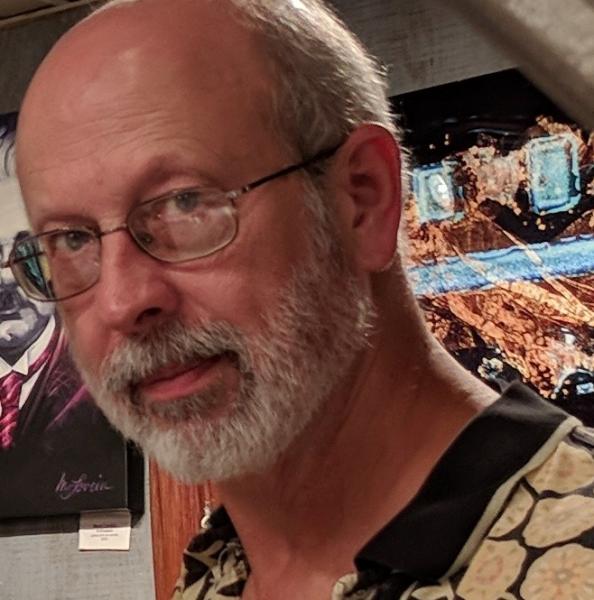 Writer/artist Mark Martel has mixed words and images through a career as an advertising art director and beyond. But it was after moving to Hawaii in 2013 that he finished writing and illustrating his first book. Dayton’s Children chronicles innovators from his home town who changed our world (imagine Hawaii without air travel).
Decades spent alongside copywriters and proofreaders trained Mark in the art of preparing works for print. He has painted and designed dozens of book covers as well as CDs, graphic novels, and even opera posters. On the verbal side, Mark has adapted The Voyage of the Beagle for TV and written and illustrated the graphic novel, Rare Earths. He is at work on an industrialist biography as well as the screenplay Leadheads. He also helps authors craft and polish books for a crowded marketplace. Learn about the unexpected journey to write, paint, design and polish his first art book, If The Masters Painted Hawai‘i: How Picasso, Van Gogh, Warhol and others might have pictured Hawai‘i Island. 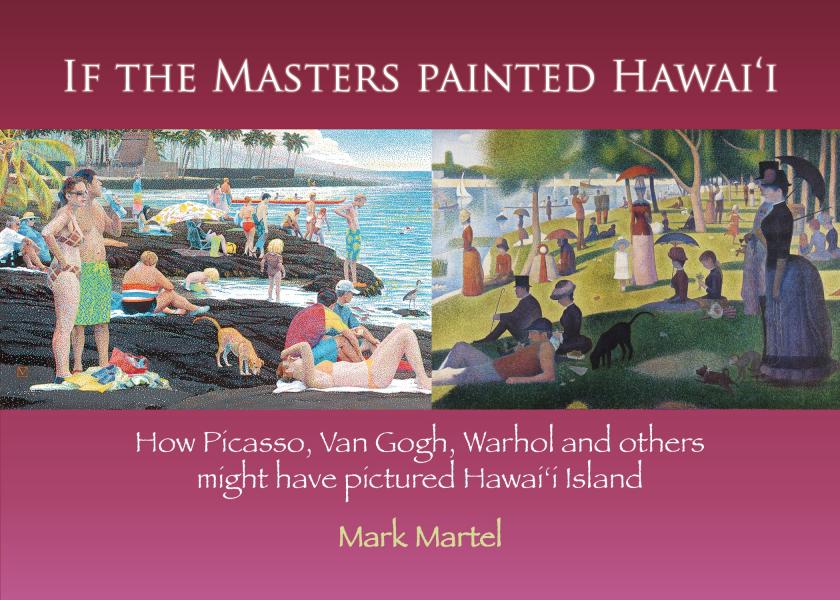 Mark has the uncommon talent of a visual chameleon, constantly absorbing new styles and media. What began as studies of fine art masters evolved into “local kine” reinterpretations of their most iconic works. Now Botticelli’s Venus surfs at dawn, Van Gogh’s Sunflowers bloom into Proteas, and Monet’s Woman with a Parasol strolls the beach. Step into an imaginary art museum of classic and modern impressions of Hawai‘i, while Mark tells the charming story behind each work and its local tie-in.
At Words and Wine Mark will display original paintings from If The Masters Painted Hawai‘i, along with prints, cards and of course books, now published in a larger edition. You can also track him down most Thursday afternoons at the Blue Sea Artisans Gallery right across from Kona Stories.

Virginia Fortner, a Hawi resident for seven years, has written since she first learned to scribble in first grade. She has published poetry, essays, memoirs, short stories, newspaper articles,  10-minute plays, and fiction, At the Edge, and biography, A Design of His Own. She's midway into China Conundrum, another page-turner begun while teaching English in the Mideast.

A Design of His Own is Hawaii resident, Michael Eaton’s story as a boy who grew up near the Pacific, learned the value of work at an early age, stuck to his principals, got some lucky breaks, knew a smile always helped, and brings few regrets to this late stage of life. His shaper’s touch came after driving hotrod Yellow Peril across Route 66, encountering pirates outside Singapore, gliding California valleys, surfing waves, and going solo with his business. There’s wisdom, humor, and more than a little adventure in the tales of his remarkable life, mostly told in Mike’s words after illness robbed him of ability to write.

A Design of His Own (Paperback)

2019 presentor at Words and Wine

This feature require that you enable JavaScript in your browser.
END_OF_DOCUMENT_TOKEN_TO_BE_REPLACED

This feature require that you enable JavaScript in your browser.
END_OF_DOCUMENT_TOKEN_TO_BE_REPLACED

This feature require that you enable JavaScript in your browser.
END_OF_DOCUMENT_TOKEN_TO_BE_REPLACED