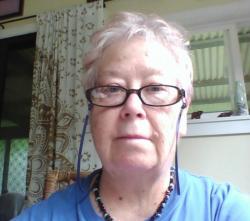 Wendy Wilson was born and raised in the suburbs of New York and left them for the Blue Ridge mountains of Virginia in 1986. There she raised a variety of children, goats, sheep and cows on a small farm. She retired from her library career in 2017 and devoted her time to writing after moving to the Big Island of Hawaii in 2019.

GWEN J’SARAJEN is a 20 something overweight computer research specialist who has spent her life trying to lose weight. She is desperate and resorts to some odd solutions including talking her doctor into prescribing a medication that causes weight loss by inducing nausea. A friend, REBA, suggests she attend a hypnosis seminar. This seminar induces a surreal dream that sparks her into a new search. Before long she is obsessed with vampires, who are always depicted as gorgeous and stunningly beautiful.

Her research leads her to New Orleans; there she discovers that vampires are real and one has taken an interest in her prowling around the dark alleys of the city. COLIN is a centuries old Scottish vampire who needs updating for the computer age. They strike a deal. Gwen will bring Colin up to speed and he will turn her beautiful and graceful.

Gwen enjoys the life. Her body is transformed into a lithe, graceful alluring woman; every man’s airbrushed fantasy. While Colin guides her on the journey, she discovers one uncomfortable fact about her new life. After an overeating binge the two return to the old mansion that is their home. Walking past a full length mirror Gwen sees her reflection; not the beautiful sex goddess that walked out earlier. Instead, what has returned is the lumpy, overweight body she thought she had discarded. She needs to avoid indulging forever; she must live an eternal diet.

She drops from view and her friends, Reba and WILLIE join Gwen’s sister EMILY in searching for the now missing Gwen. They arrive in New Orleans to discover there is an ongoing missing persons problem that no one in power is taking seriously. They find a forgotten computer thumb drive in Gwen’s abandoned room and see some disturbing evidence which leads them to comb the area of New Orleans where the last video was taken.

Emily is kidnapped and finds herself in a dark cage in the lower level of a ante bellum mansion in the swamps outside of the city. Strange, pale, and unresponsive humans silently bring her bread and water. Finally she meets her kidnappers; an incredibly strong, ancient, Asian vampire who everyone refers to as “MADAME” and her coven.

In a fit of anger at Colin, Gwen breaks with him and goes on another binge eating excursion with predictable results. As she is searching for a place to hide for the day, she sees her friends and realizing her diet has been broken, she decides to use her fat appearance to her advantage. A small reunion ensues where Reba and Willie explain why they are in New Orleans and Gwen tells them of this fantastic guy who is taking care of her now. Dawn is close and they part, promising to meet again that evening.

Gwen, Reba, Willie and Colin join forces to search for Emily after Colin reveals that he knows Madame from long ago and that she is, in fact, his maker. Colin had left when he could no longer follow Madame’s practice of enslaving humans. Gwen’s unique metabolism works in their favor, and she deliberately turns herself from a sleek figure to an body obese and unrecognizable as a vampire to avoid Madame’s coven members.

Reba and Willie use the daylight to reconnoiter the mansion and Reba finds Emily. Willie is caught by a wide awake Madame and sacrifices himself to allow his friends to escThe time has come for Colin to confront his mentor and maker, Madame. He challenges her to single combat. While the fight goes one, Emily and Reba infiltrate the house and set it aflame, trapping all the younger vampires inside. Colin defeats Madame in a bloody battle and the house is burned to ashes.

See more about this author at: https://www.wbwilson.com/

This feature require that you enable JavaScript in your browser.
END_OF_DOCUMENT_TOKEN_TO_BE_REPLACED

This feature require that you enable JavaScript in your browser.
END_OF_DOCUMENT_TOKEN_TO_BE_REPLACED

This feature require that you enable JavaScript in your browser.
END_OF_DOCUMENT_TOKEN_TO_BE_REPLACED