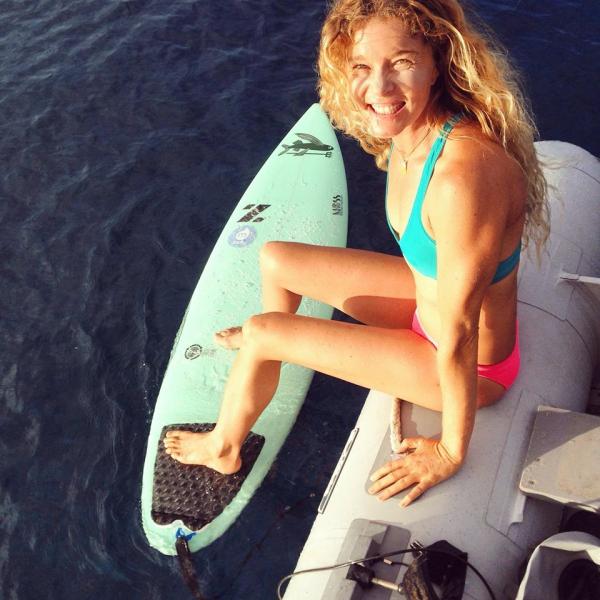 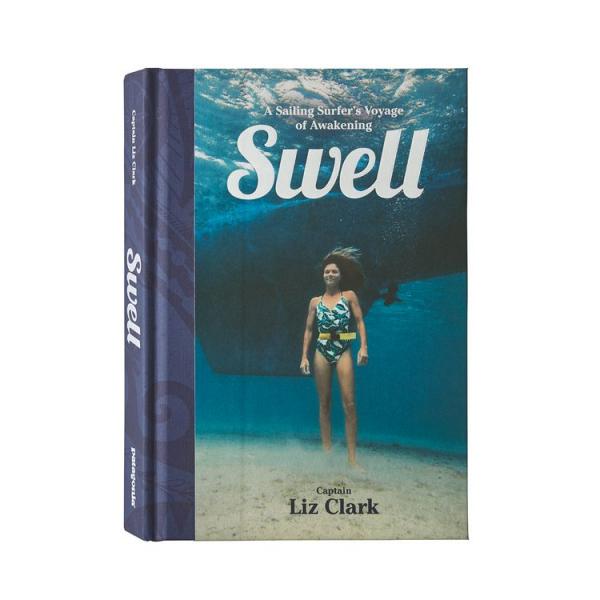 Meet the author of Swell: A Sailing Surfer’s Voyage of Awakening -  Liz Clark

This informal meet and greet will happen on March 6 from 3 - 5 PM.  Stop by and talk story with Liz and get her to personalize your copy of Swell, on sale now at Kona Stories for $35.00.

In this memoir, Captain Liz Clark captures her voyage in gripping detail, sharing tales of sailing in high seas, of solitude and surprises, of finding connection to the earth and commitment to living in harmony with it. Swell: A Sailing Surfer’s Voyage of Awakening is published by Patagonia.

I learned to sail at seven years old in San Diego, California on a little red sailing dinghy. At ten, I completed a 5,000-mile, 6-month cruise in Mexico with my family on our sailboat, The Endless Summer, experiencing a different culture, the freedom and beauty of sea travel, and opening my mind to horizons beyond my hometown reality. I credit the origin of my environmental concern to my exposure to the contrasting landscapes of grave pollution and radical natural beauty in Mexico.

Albeit very young, this trip profoundly impacted me. Two things were clear when we returned to San Diego in 1990: I wanted to protect the natural world from human destruction and, one day, I wanted to be the captain of my own sailboat.

At fifteen, my love of the ocean and natural athletic inclination led me to try surfing. Soon after, it was all I wanted to do. Determined to excel in the sport, I spent all my free time in the water and eventually started competing. I surfed in private contests and for the UCSB surf team while studying at UC Santa Barbara. My competitive career culminated in a win at the NSSA Nationals, making me the 2002 College Women’s National Champion. Although I enjoyed pushing my level of surfing through competition, I was more inclined to chasing nature saturated,
exploratory surf experiences. I enjoyed surfing most for the adventures leading to remote breaks, the connection with the elements, and the opportunities for self-discovery. I was full of bigger questions that needed answers.

I began taking surf trips during summers and school breaks to Barbados, Costa Rica, El Salvador, Guatemala, Hawaii, Mexico, Nicaragua, and a ‘study abroad’ trip Australia. As I finished up my degree in Environmental Studies, I remember feeling frustrated by the direction the world seemed headed. Our distance and apathy for the natural world and failure as a country to seek and promote environmentally sustainable living left me disappointed and frustrated. I clung to my dream as a ‘way out’.

My surfing obsession further fueled this fire. The pressures of increasing crowds and urban pollution made the idea of a free-ranging life on the sea seem even more appealing. After graduation, I crewed on different boats to gain experience for about a year, and then spontaneously came upon the chance to become the captain of my own sailboat. Thanks to the generosity of my friend and mentor, Barry Schuyler, along with support from my family, Swell and I were united.

Through this stroke of serendipity, my intense determination, and the generosity and advice of innumerable people in Santa Barbara and beyond, Swell was converted into an ocean-worthy vessel. For almost three years, I worked with local professionals–mechanical, rigging, sail repair, radio, fiberglassing, and others, learning and overhauling each of Swell’s vital systems in order to prepare myself and my ship for sea. Only having sailed the boat a handful of times during this busy preparation period, I honestly didn’t know whether I would be capable of a captain’s tasks and responsibility. Although the uncertainties ahead petrified me, the alternative of not going seemed even more unthinkable. And so in October of 2005, I pointed Swell’s bow south from the Santa Barbara harbor.

Over the 20,000 nautical miles of ocean I’ve sailed since, I’ve discovered that the most important sort of exploration happens within. The enormous sense of fulfillment I’ve gained from following my dream, delving into self-awareness, and living a simple life close to nature motivates me to continue sharing my experiences in hopes of the same for others.

The History of Swell:

Swell was built in 1966—the 68th Cal-40 to come out of Jansen Marine. From the limited history I’ve uncovered from documents found on board, I now know that Swell was originally named ‘Maria’. Records of her first owner trace her to a J.L. Williams out of Mercer Island, Washington. Williams had her rated and certified for offshore racing in 1973. An original customs document shows a change in ownership to three new owners in 1987. Edward C. O’Brion, Larry Cowan, and Maurice Rattray kept her moored at the Shilshole Marina in Seattle, Washington. Sometime after, another document suggests she was relocated to Sausalito, California under the ownership of a Mr. Lowden Jessup. That’s all I know of her whereabouts before our purchasing her from Mr. Tim Yox, who had kept her in the Santa Barbara harbor. He informed me that she had been named ‘Forever Young’ when he’d purchased the boat and had renamed it ‘Alisio’ which is Spanish for ‘trade winds’. Because the boat’s name had already been changed multiple times, and not discovering her ‘original name’, Maria, until well into the voyage, I re-christened her as ‘Swell’ in the company of friends and family after the proper oral request to Poseidon on my 25th birthday, April 28th, 2005. Despite that she has been ‘Swell’ to me ever since, her previous names seem to have maintained a significance under my ownership as well.

At purchase, Swell was in decent condition, but her light coastal use and relatively old age left her in need of more work than we’d originally presumed necessary to prepare her for offshore voyaging. She did have a newly installed Yanmar 51-hp diesel engine, which saved worrying about an unreliable motor. Plus, the tiller had been replaced with wheel steering, which would be easier for my strength. One of the previous owners had added a hardwood ‘skeg’ between the rudder and keel which would serve both as additional protection for the exposed spade rudder and possibly help the boat track better downwind. It had a functioning Furuno radar, a depth sounder, a folding max prop, a hefty Maxwell anchor windlass, a gimbaled 3-burner Seaward propane range/oven, and her sails were in good condition. But Swell would need a great deal of work to be converted into an open ocean cruiser.

Over the two years that followed, under guidance and collaboration with mentor and sponsor, Barry Schuyler, I worked with local marine professionals to overhaul Swell and simultaneously learn about safety equipment, mechanics, electrical systems, rigging, sail and fiberglass repair. Enormous thanks to Barry for his vision, financial support, and patience through the refit process and to the many who helped in countless ways. Special thanks to Neil Pryde Agent, Marty Spargur, James Lambden of Above the Waterline, and Mike Jansen and Mike Jansen Jr. of Jansen Marine (all out of Santa Barbara) for your generous contributions of skill, time, goods, heart, knowledge, and patience in preparing Swell for this voyage. The 18,000 miles of safe sailing behind me are a testament to the quality of your work and profound expertise. 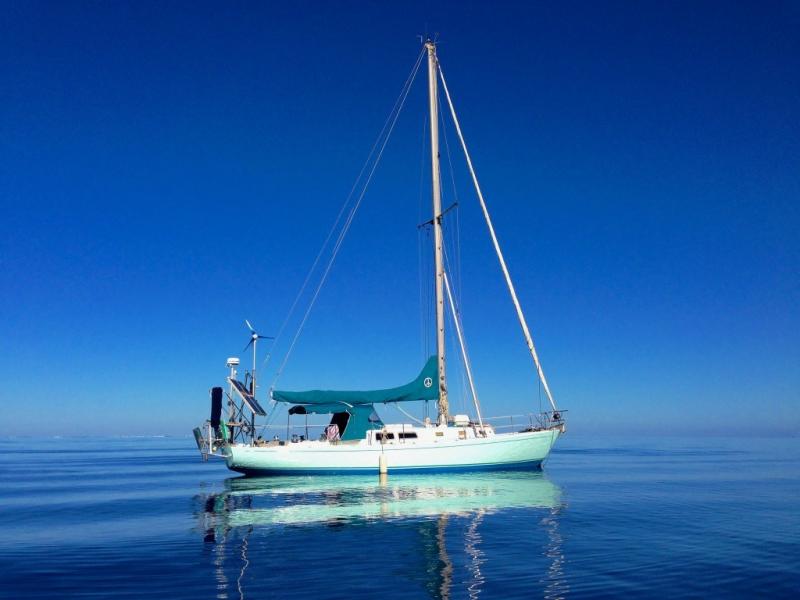 END_OF_DOCUMENT_TOKEN_TO_BE_REPLACED

This feature require that you enable JavaScript in your browser.
END_OF_DOCUMENT_TOKEN_TO_BE_REPLACED

This feature require that you enable JavaScript in your browser.
END_OF_DOCUMENT_TOKEN_TO_BE_REPLACED

This feature require that you enable JavaScript in your browser.
END_OF_DOCUMENT_TOKEN_TO_BE_REPLACED