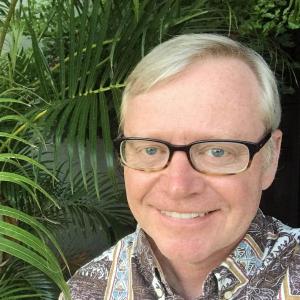 Kelly became hooked on science after Neil Armstrong took an epic stroll one Saturday evening in July 1969. He later served as a submarine officer based in Scotland and New England. After leaving the Navy, he spent two decades teaching college physics and astronomy. A member of RMFW and the Hawaiʻi Writers Guild, Kelly loves reading and writing mind-expanding science fiction. He launched the Lost in the Multiverse series in 2019, which include the novels Mauna Kea Rising and Elle: The Naked Singularity. His articles and short stories have appeared in Pilot Mag, the Torrid Literature Review, and Latitudes. His short story Farragut’s Gambit appeared in the anthology 20,000 Leagues Remembered. In 2019, he was named honorable mention for the L. Ron Hubbard Writers of the Future Award. He blogs about science and writing at mwkelly.com and can also be found on twitter @mwkelly2001.

The first novel in the Lost in the Multiverse is a story of hope, grit, and triumph in the face of an epic calamity. In a parallel world, the British Hawaiian Islands sit between rival superpowers, Japan and the UK. A single mother struggles to steer her son into adulthood when an epic solar flare throws their world into chaos. The Pacific power grids fail. Cities plunge into darkness. “A thoughtful, intelligent tale of loss and resilience."—Goodreads Review.

The second book in the Lost in the Multiverse series is science fiction spiked with magical realism, a story in which a college student finds herself lost in the multiverse. When Elle slips to a parallel Earth, she must evade capture and find a way to return to her home world. Elle pulls us into a world of ancient superstition and modern science, and forbidden love. Lost in time. Lost in love. Lost in the multiverse.  But anchoring this suspenseful, propulsive novel is an intimate young woman searching for her place in an upside-down twin world.

This feature require that you enable JavaScript in your browser.
END_OF_DOCUMENT_TOKEN_TO_BE_REPLACED

This feature require that you enable JavaScript in your browser.
END_OF_DOCUMENT_TOKEN_TO_BE_REPLACED

This feature require that you enable JavaScript in your browser.
END_OF_DOCUMENT_TOKEN_TO_BE_REPLACED