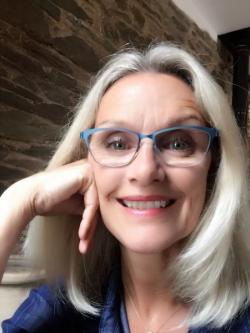 I was born in a little village called Old Basing in Hampshire, England. Although the village is mentioned in the Doomsday Book, its real claim to fame was the siege of Old Basing House that took place during the English Civil War. As children, my sister and I used to play among the ruins and in the secret tunnels. I dreamed of musketeers and knights in shining armor and I'm quite sure it was there that I first discovered a passion for telling stories. My mother said I told fibs but I just liked to embellish my version of events because they seemed more interesting.

As a teenager, my family moved to Cullompton in Devon and there, began my love affair with the West Country. In Agatha Christie's heyday, the south coast of Devon was known as the English Riviera because of its mild winters. They even have palm trees although I'm told they originate from New Zealand. Devon, too, is steeped in history dating back to Roman times. It's filled with legends, mystery and superstition and still retains a certain charm and "olde worlde" feeling that speaks of a simpler time.

After a disastrous stint in the Royal Navy, I applied to the local weekly newspaper to become a cub reporter. My duties primarily involved standing at the church door taking down the names of the mourners—a tradition the newspaper was very proud of in those days. In fact, it was this first real job that became the basis of the Vicky Hill Mysteries complete with all the quirky English customs and traditions that give Britain a reputation for eccentricity.

At twenty-one, I was restless. Much as I loved Devon I knew there was a bigger world out there.

I moved to Kent where I did a spell as a secretary to a Formula One World Champion (very exciting) followed by a wonderful job working for a French antique dealer who specialized in seventeenth century oak furniture. This interest, coupled with being a passionate supporter of S.P.A.B. (the Society for the Protection of Ancient Buildings), sparked the idea years later for my new series—the Honeychurch Hall Mysteries—a contemporary upstairs/downstairs, set against the backdrop of a crumbling country estate.

For the next decade or so I worked as a flight attendant for both commercial airlines and private jet charters traveling extensively all over the world. It was on one such flight that my life changed dramatically. I was lucky enough to speak to Steven Spielberg who asked me if I had a dream. Of course, my writing aspirations had never gone away, they had just lain dormant whilst I kept promising myself that this year would be different. This year I would write my book. Steven said if I was really serious about writing, then I must act on it and not just talk about it. He talked about the "bridge of faith"—yes, that iconic scene in INDIANA JONES AND THE LAST CRUSADE. I made a solemn intention to take that leap and that's when weird, serendipitous things began to happen. Before I knew it, I was dragging my daughter and two cats to start a new life in Los Angeles, California. I worked for various film studios, read gazillions of scripts and learned all I could about the craft of writing be it screenplays or long-form narrative. I also enrolled in the UCLA Extension Writers' Program where I was lucky enough to teach a mystery-writing workshop.

When Hollywood had run its course, I took a job working for the chairman of a west coast advertising agency where I worked for more years than I dare to count, but just last year I took another leap of faith and moved back to the English countryside with my two Hungarian Vizslas.

I know, without a shadow of a doubt, that if you say, "Yes" to whatever life has to offer, no matter how daunting, the most extraordinary things really can and do happen. After all, they happened to me.

Here is quick snapshot of Death at High Tide:

When Evie Mead's husband suddenly drops dead of a heart attack, a mysterious note is found among his possessions implying that Evie owns the deeds to a small hotel on Tregarrick Rock, a tiny island in the Isles of Scilly.

Still grieving, Evie wants her accountant to sort it out but her glamorous sister Margot has other ideas. Having flown in from Los Angeles to lend her moral support, Margot believes a luxurious weekend away would do Evie good and where better to go than the very hotel that might soon be hers.

But the sisters are in for a disappointment. Although the crumbling Art Deco hotel has a fascinating history—many detective writers from the Golden Age had stayed there over the years—it's definitely more fixer-upper than spa resort. What's more, the foul-tempered hotel owner claims he's never heard of Evie's husband and the other island inhabitants, ranging from an ex-con receptionist to a vicar who communicates with cats, aren't any easier to read.

When a body is found on the beach and then a second soon follows, Evie and Margot find themselves prime suspects with the local constabulary who claim there was "no crime on Scilly until you came along."  Stuck on the island at high tide and with only a handful of residents, the sisters find they must unravel the island's secrets that span generations—along with several of their own—if they want to make it back alive.

For a sneak peak at Chapter One click here:

Death at High Tide is the delightful first installment in the Island Sisters series by Hannah Dennison, featuring two sisters who inherit an old hotel in the remote Isles of Scilly off the coast of Cornwall and find it full of intrigue, danger, and romance.

This feature require that you enable JavaScript in your browser.
END_OF_DOCUMENT_TOKEN_TO_BE_REPLACED

This feature require that you enable JavaScript in your browser.
END_OF_DOCUMENT_TOKEN_TO_BE_REPLACED

This feature require that you enable JavaScript in your browser.
END_OF_DOCUMENT_TOKEN_TO_BE_REPLACED