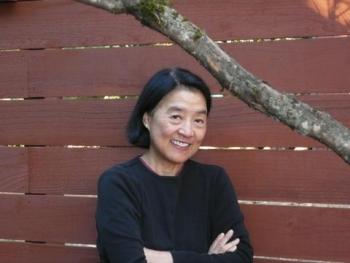 Gail Tsukiyama was born in San Francisco, California to a Chinese mother from Hong Kong and a Japanese father from Hawaii. She attended San Francisco State University where she received both her Bachelor of Arts Degree and a Master of Arts Degree in English with the emphasis in Creative Writing. Most of her college work was focused on poetry. She was the recipient of the PEN/Oakland Josephine Miles Award for Literary Excellence and was the first author to receive the Asia Pacific Leadership Award from the Center of the Pacific Rim and the Ricci Institute. A resident of the San Francisco Bay Area, she has taught at San Francisco State University, University of California, Berkeley and Mills College. She has also been a freelance book reviewer for the San Francisco Chronicle and Ms Magazine.

She is the author of seven novels published by St. Martin's Press, including Women of the Silk, The Samurai's Garden, Night of Many Dreams, The Language of Threads, Dreaming Water, The Street of a Thousand Blossoms, and A Hundred Flowers. Her latest novel, The Color of Air, will be out by HarperCollins in July of 2020.

Gail is also currently the Executive Director of WaterBridge Outreach: Books + Water, a nonprofit organization that provides books and access to water in developing countries.

The Color of Air - Set in Hilo Hawaii!

From National bestselling author of Women of the Silk and The Samurai's Garden comes a gorgeous and evocative historical novel about a Japanese-American family set against the backdrop of Hawai'i's sugar plantations.

Daniel Abe, a young doctor in Chicago, is finally coming back to Hawai'i. He has his own reason for returning to his childhood home, but it is not to revisit the past, unlike his Uncle Koji. Koji lives with the memories of Daniel's mother, Mariko, the love of his life, and the scars of a life hard-lived. He can't wait to see Daniel, who he's always thought of as a son, but he knows the time has come to tell him the truth about his mother, and his father. But Daniel's arrival coincides with the awakening of the Mauna Loa volcano, and its dangerous path toward their village stirs both new and long ago passions in their community.

Alternating between past and present—from the day of the volcano eruption in 1935 to decades prior—The Color of Air interweaves the stories of Daniel, Koji, and Mariko to create a rich, vibrant, bittersweet chorus that celebrates their lifelong bond to one other and to their immigrant community. As Mauna Loa threatens their lives and livelihoods, it also unearths long held secrets simmering below the surface that meld past and present, revealing a path forward for them all.

The Color of Air: A Novel (Hardcover)

This book is set in my home Island of Hawaii in the local community of Hilo. It is full of the richness of that community where one feels the connection of Ohana and the strength it provides when faced with the pain of loss.  This author is a life long favorite of mine and she really hit home with this one... I never wanted it to end. Each time I go to my own mango tree to enjoy its richness I will be reminded of this story and the love family brings to me.

The Samurai's Garden: A Novel (Paperback)

Women of the Silk: A Novel (Paperback)

The Language of Threads: A Novel (Paperback)

A Hundred Flowers: A Novel (Paperback)

The Street of a Thousand Blossoms: A Novel (Paperback)

Night of Many Dreams: A Novel (Paperback)

This feature require that you enable JavaScript in your browser.
END_OF_DOCUMENT_TOKEN_TO_BE_REPLACED

This feature require that you enable JavaScript in your browser.
END_OF_DOCUMENT_TOKEN_TO_BE_REPLACED

This feature require that you enable JavaScript in your browser.
END_OF_DOCUMENT_TOKEN_TO_BE_REPLACED