Author of the Week: Marya Schwabe 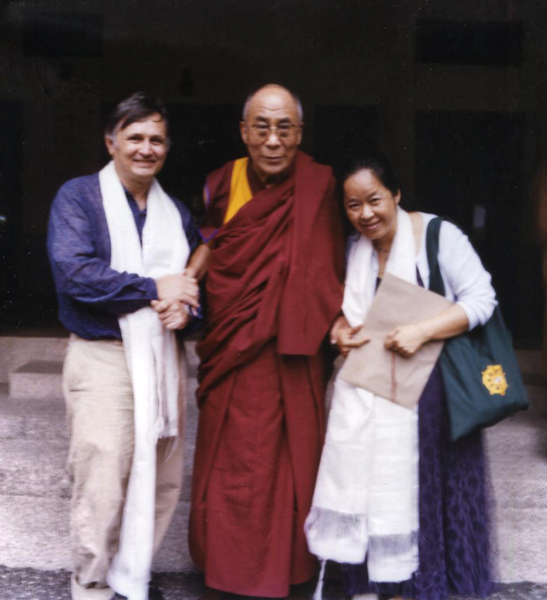 Road to Freedom: A Journey from Occupied Tibet, could be the latest fictional thriller, full of political intrigue, realistic characters and nail-biting adventures. But the truth is, it is a real story told in divinely-written and intimate detail of the author’s personal journey, endorsed by His Holiness the 14th Dalai Lama himself.

Author Marya Waifoon Schwabe and her husband, Michael “Miguel” Schwabe, were the perfectly qualified emissaries to undertake a ten-year sacred mission across the world to locate the reincarnation of their beloved teacher, Nechung Rinpoche and escort him out of Chinese-occupied Tibet to safety and tutelage in Dharamsala, India, and eventual continuation of the teachings of his predecessor at a Tibetan Buddhist Temple in Hawai‘i. He was but eight-years old at the time.

Nechung Rinpoche had passed away suddenly in 1983. He was the reincarnate lama of Nechung Monastery in Tibet and India, the institution that houses the Chief State Oracle of Tibet.

Wood Valley Temple on the Island of Hawai’i, also known as Nechung Dorje Drayang Ling was founded by him. The author and her husband serve as resident managers and caretakers for the temple. From 1975 to 1983, they lived and worked closely there with Rinpoche, immersing themselves in Buddhism and learning spoken and classical Tibetan from him. During and since that time, they have organized visits and teaching programs for more than fifty lamas, including two visits by His Holiness the Dalai Lama, while continuing to travel extensively and study throughout Asia.

“Miguel and I had a theoretical concept of the process of how reincarnate lamas were discovered and recognized from accounts in the biographies of eminent lamas. The notion of putting these principles into action firsthand was compelling, as was the wish to locate the incarnation of our teacher,” Marya said.

In accordance with the Tibetan tradition of finding the reincarnations of high lamas and together with the Nechung monks in India where they had taken refuge from the torturous climate of occupied Tibet, the Schwabes sought the guidance of His Holiness the Dalai Lama.

“In 1987, His Holiness apprised us that Nechung Rinpoche had been reborn in Central Tibet. His Holiness gave several clues: the year of the boy’s birth, the names of his parents, and the locale of Lhasa, the capital city of Tibet.”

“First and foremost, how were we to find this boy? Where would we start? Even with the names of the child, mother and father, it was still a challenge. What were Rinpoche’s parents like? Did they have faith in the Buddha Dharma and the Dalai Lama or had they been indoctrinated into the Communist Party? What would their reactions be? Would they allow us to take their child to India? Moreover, what about the young boy—would he leave his parents to go with total strangers and join a monastery?” There were so many unanswered questions, says Marya.

A search party of three people—a monk from Nechung Monastery in India, Marya and Miguel —made journeys to Tibet in 1987 and 1993. Their search led them to sacred visionary lakes and ancient monasteries. The expeditions were precarious and filled with challenges such as where to look, whom to trust, and how to accomplish a nearly impossible mission in a Chinese communist-occupied country where surveillance was prevalent. Ultimately, the escape with the eight-year-old lama entailed crossing multiple heavily guarded checkpoints, including two international airports.

Road to Freedom - A Journey from Occupied Tibet: The True Story of the Search, Discovery, and Escape of a Reincarnate Lama (Paperback)

By Marya Waifoon Schwabe, His Holiness the Dalai Lama (Foreword by)
$50.00

This is their story. Road to Freedom: A Journey from Occupied Tibet—newly published in 2020, with a Foreword by His Holiness the 14th Dalai Lama—is receiving positive reviews:

“These are some of the words that were coming to my mind while I was reading: captivating, completely engrossing, richness, compelling, wonderful flow, amazing story, WOW, poetic imagery, this is VERY good, very suspenseful. As a layperson I found the narrative of this odyssey spellbinding from the first paragraph to the last sentence. I can only imagine how powerfully significant it will be for those with a greater knowledge and understanding of Tibetan Buddhism and lineage.”  – Ngaire

“What a great book and such an amazing story!! There haven’t been many books where I started reading the first page and didn’t put it down until I finished the last page. This was one of them! There were times when I got lost in reading and forgot that these were actual events and not something out of the latest fiction bestseller.” – Aaron